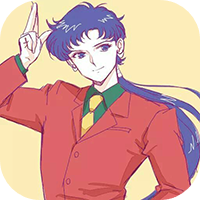 ｃｉｖｉｌｉａｎ
Seiya has blue eyes and long, hip-length raven hair that he keeps tied in a low ponytail. As the leading vocalist of the Three Lights, Seiya is commonly seen wearing a red formal suit jacket with a navy blue long-sleeved button-up shirt underneath with a yellow long tie at the collar, red formal pants, and black shoes. Seiya also wears a pair of silver moon earrings on both of his ears. He sometimes handling the red rose during concerts or as a weapon when he threw the rose on Sailor Tin Nyanko to rescue Usagi as Eternal Sailor Moon from getting her star seed.

When he studies at Azabu Juban High School, he wore a different school uniform like both Taiki and Yaten to differ from the other male students wearing standard male school uniforms. 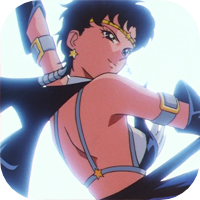 Her sailor uniform, identical to the other Starlights, is a black two-piece outfit, consisting of a bikini-like top and hotpants. She wears knee-length boots and elbow-length gloves. She wears a golden beaded tiara, beaded belts on her waist and golden star earrings. Her secondary color is light blue. She also wears a light blue belt-like choker and belt-like straps on her upper arm. 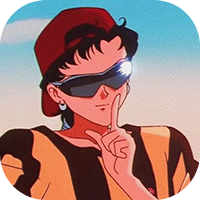 ｐｅｒｓｏｎａｌｉｔｙ
Seiya's personality was considerably lighter than that of the other two Starlights. He was much more childlike in his attitude, with a slight prankster edge to his character, and there were brief moments when he was not thinking about his mission. He had a cheerful disposition and was much more easygoing. He was also more willing to become close to Usagi and her friends, while the other two Starlights mainly kept to themselves and originally refused to work with the Solar System Senshi at all. As mentioned by Taiki and Yaten, Seiya is also a sore loser.

It had been far too long since Rei was truly given some time to reflect on certain words that triggered a vision. A light flickered before her, like the beginning of an old projector film starting up. The images were blurry at first, as light projected through the thin film material taking on the colors of white, black and brown as if the viewing was ancient. In the white noise colored background a faint silhouette of an individual slowly began to take shape. The individual was surrounded in several long flowing, transparent veils. This person was very familiar, someone she knew a great deal. Caught in the vision being shown to her, "Princess. . ." escaped Rei's lips. Not realizing she said that out loud in hushed tones. In the vision, the silhouetted person before her was reaching out, was she reaching out towards her? Someone else? Or perhaps she was pointing something out that Rei could not see. Rei went to speak, but found she could not. Suddenly a brilliant light from the background, erupted violently, blinding Rei. The brightness from the light enveloped the person before her that had been reaching out, snuffing her out from existence. Pulled abruptly from the vision, tears were streaming down Rei's cheeks, as her chest became tight, she felt like she could no longer breathe.

Lifting her fingers up and away from the golden star and crescent moon, Rei felt the warmth of dampness along her face. Reaching up to wipe away the tears that had fallen. Glancing away from Seiya as she tried to look past what was just shown to her, until she could investigate the matter further.


Quote:
"Looking at the photo of you and your friends reminded me of that."

Shifting her gaze back towards Seiya, her dark purple eyes appeared to be more focused on his mouth as they formed the words that spilled out. She needed a distraction. Lifting her eyes upwards, she saw that Seiya was looking back at her. Which in turn, caused her to lick her lips slightly as if they were dry. Clearing her throat, "Oh." Was all she managed to get out. Her mind was still buzzing with activity. Unsure of what she had said to Seiya if anything. And to somehow explain how she suddenly became so emotional like that out of nowhere. Was this an omen of things to come? Past events? The thought of trying to analyze something so fresh in her mind that provided little evidence was difficult. So much emotion was bubbling beneath the surface. Rei needed a distraction. Anything would suffice!
Marveling Adventurer Report | 07/27/2022 6:10 pm

She had several reasons as to why she wanted to sing. There was only one true conclusion as to why she wanted to sing. "To be heard, like you. I want the person I care about to hear the meaning behind my words written in song.. letting them know that I will always be there for them. That I have their back, that I will protect them by any means necessary even if it means taking a bullet for them so that they can live." Rei believed in that. In her mind, as a Sailor Guardian it is her duty to use her powers to vanquish the forces of evil and to protect their princess at any cost.

Rei had not forgotten who she was talking to. She had a deep feeling that Seiya understood her more than he let on. Catching the few hints that he has shared with her when they've spoken with one another. Rei felt as though there was more to Seiya. More than he was really wanting to share and she respected that. She was not the type to pry, that is of course, unless something endangered their princess that she was sworn to protect.

I lurk in arenas and runway, sometimes I'll comment otherwise I will definitely vote.

That's all you need to know.

To clear things up; I am strictly a cosplay account. Everything I say and do is as Seiya/Fighter or how I perceive them to be, which means I will be in character most of the time.