Queen Serenity is slender and tall with fair skin and bright silver eyes. She has long silvery-white hair done up in odango. She wears a white dress with a bow on the top, adorned with a gold crescent brooch. She has a golden-colored crescent moon on her forehead, which is the mark of the Silver Millennium itself and the royal family's symbol. 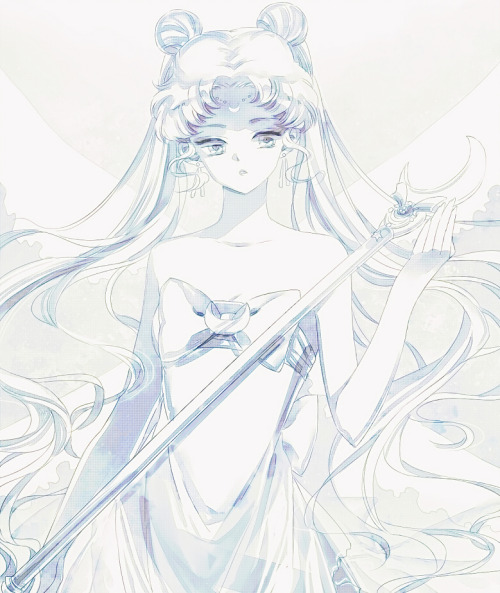 Queen Serenity was the queen of the Moon Kingdom during the Silver Millennium and the mother of Princess Serenity. She states that the people on Earth knew her as the Moon goddess Selene.

Queen Serenity was the first to use the Moon Stick and use its power together with Silver Crystal. She gave it to Luna and it was later used by Sailor Moon.

While visiting the moon after Sailor Venus manages to pull out the Sacred Sword from the stone, Queen Serenity's consciousness appears to the Sailor Guardians. Queen Serenity explains she is able to appear to them thanks to the Eternity Main System of the Moon Castle. Even though her physical form has perished her conscious her will her memories and spirit still remain in holographic form. After she placed Luna and Artemis in suspended animation and sent them to Earth to watch over the Sailor Guardians, she waited so long to see her daughter again. As Queen Serenity tells the Sailor Guardians the history of the Moon Kingdom their memories return and they see the Moon Kingdom as it once was.

Princess Serenity used to sneak out and travel down to Earth constantly for the lush greenery and sweet winds. Then one day she found love. The Moon Kingdom would protect the Earth. One day disaster struck, a grotesque creature invaded Earth and attempted to conquer the planet for herself. She was a pure evil who schemed to control the Silver Crystal, she brainwashed the humans of Earth and attacked the moon. Prince Endymion was the sole Earthling who resisted and fought to protect Princess Serenity. He was killed protecting Serenity shortly thereafter, full of grief and despair Serenity took her own life with the power of the Silver Crystal. Queen Serenity managed to seal Queen Metaria away. But as a result she turned Silver Millennium into stone and crumbled into the present ruins. Earth was completely destroyed and history of Earth began anew.