Stand firm then, with the belt of truth buckled around your waist, with the breastplate of righteousness in place, and with your feet fitted with the readiness that comes from the gospel of peace. In addition to all this, take up the shield of faith, with which you can extinguish all the flaming arrows of the evil one. Take the helmet of salvation and the sword of the Spirit, which is the word of God.

Hey there! Welcome to my profile! Feel free to call me anything pertaining to my username. Also, feel free to PM me or leave a comment any time 3nodding

Finally, brothers and sisters, rejoice! Strive for full restoration, encourage one another, be of one mind, live in peace. And the God of love and peace will be with you.

"Therefore I tell you, do not worry about your life, what you will eat or drink; or about your body, what you will wear. Is not life more than food, and the body more than clothes? Look at the birds of the air; they do not sow or reap or store away in barns, and yet your heavenly Father feeds them. Are you not much more valuable than they? Can any one of you by worrying add a single hour to your life?"

There are over 50 million people in our world today that have Epilepsy/Seizure Disorder. Chances are, you probably know someone that has epilepsy and they might not even be telling you because they are too afraid or embarrassed to.

Anyone with a brain can have a seizure at any point in time in their life, even if they've never had one before. Not all seizures are genetic, up to 50% of people do not know and/or will never know what caused their seizures in the first place (idiopathic seizures/epilepsy).

Not all seizures are convulsions. Not all people with epilepsy have a light sensitivity. Be aware for other signs such as wandering aimlessly, confused speech, picking at clothing, smacking the lips, chewing the cheek, staring blankly, lack of responsiveness, etc. if something looks strange/wrong, it probably is - make sure the person experiencing these symptoms is okay. 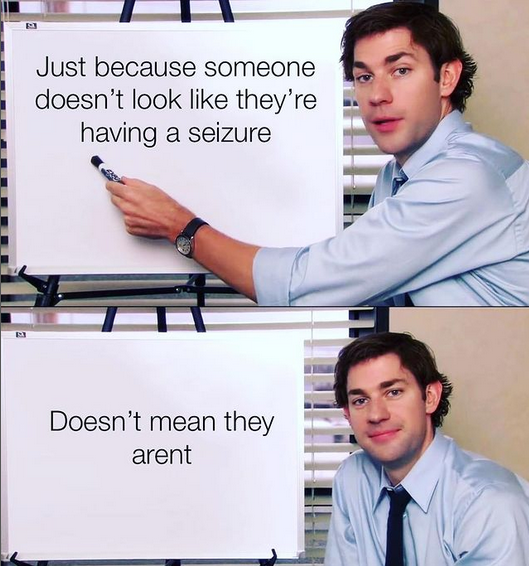 Aw those kiddos. Maybe you'll need to be stern with them, find ways to punish them like taken away their internet rights when they don't behave. I'm sorry you have had some stressful days. Other thing you should consider is sending them to school and ask your church for advice about their religious education? If anyone doesn't needs stress in their life it's you! hing goes better for you from now on and you find ways to deal with them!.

Vocaroo is a simple recording site, where you could register and temporary upload an audio in just a couple of clicks. Hope everyt

Haha and 80's wardrobe can be funny nowadays, the people at the time came up with really excentric fashion ideas. I think it was due the music industry feeling a sense of renovation or something? and tried to come up with syncretisms from various influences?

Waddaya sayin' Aqua... substance abuse and a rocknroll life is totally for you, I know you've a rockstar hidding very deep inside of you :3

Wow, looks like an very in depth take on the ideas behind the Beatles, Imma check it out. And yeah, they weren't always blasphemous but that statement was the most blasphemous words being widely known by the massive public. An iconic moment that would be carrer ruining for many famous musicians of that age. He was kind of dumb, but also bold saying that.

Hahaha, some said he died in a plane crash, or of cancer (like Harrison) I think they always pick up the most hilarious and clueless respones.

My family is of catholic faith so not sure if the sins in the scripture I am familiar with are the same but I think Jim is an example of debbauchery that went against the core spirit of believing in God and an a heavenly afterlife. He was like a preacher of individual freedom, his attitude was ehm Nietzschean, in his songs he was a free spirit who let his desires roam free. There were other blasphemous bands like the Rolling Stones, but I think he showed that attitude towards freedom more than anyone, and that's the most contradictory attitude from Christian religions, it's fully embracing earthly temptations.

And yeah, the Soft Parade is a very "trippy" song that paints many pictures, but I think there's at least one message about religion and hints to drugs. I think as you said, these are descriptions of someone who's not following the ordinary normal ways of society. I think it's his views of his environment through the symbols he perceives in another state, but in the introduction he doesn't considers God is listening to people, and he finds other knowledge or sensations that could shape the form of truth in "the soft parade". But well that's my interpretation. I really think of it as attempting to be blasphemus of certain religious idea of God.

Well u might be a nerd, but you are a super cool nerd biggrin I'd loved to hang around with you, playing arcades while listening to Queen and MJ or something!

So Queen was the first rocknroll band you listened to in your youth? mine was the Beatles, i significally listened to them and they were my favorite band, they've been very influential to me.
Smashedcookie Report | 08/24/2022 3:39 am
Aw, well nwn at least you have a bit of time for Gaia, I'm glad you can enjoy the site a bit.

Really? omg I guess I'd have to wait and I could get that Kin at a less inflated price. But are all your items worth less? Did you have for example an Angelic Halo or something? these still are worth a fortune.

I think the original producer of Final Fantasy was Square, but at the time of FFVII they have already merged with Enix. Aw :c you sound really busy! I hope at least you have very fun times with the kiddos.

Yeah I mean, there could be chill communities or guild out there too ^w^ we'll just have to dig a lil deeper.

Haha the guy from shitty flutte is not a beginner though. He knows how to play I think but he chooses to play shitty.. in that so ungodly manner to torment us all!

I never pictured you as a rocker haha! owo Are you gonna dress up with leather pants and jacket too? Also, you can homeschool your kids on how to become rockstars! You'll be killing two birds with the same stone blaugh


Omg omg omg, really? those are two of my fav bands! But they are really polemic! You know, I was thinking about Lennon's statement of their fame and Jesuschrist He obvsly didn't think it through, he was trying to make a point but was so arrogant and careless at that moment haha, still he apologized and I think he was a good person, someone who, let's say loved God or humanity in his own way. But many churches were really pissed at him. Also... the Doors are one of the most "sinful" bands out there, according to the Christian beliefs, I don't know about their members but Jim for sure's in hell haha. Do you know the song "The Soft Parade"? What do you think about it?

Tell me a bit more! Who did you started listening to these bands? Your parents or someone in your family introduced them to you? (That was my case)
Smashedcookie Report | 08/24/2022 3:05 am
Aw, sorry you had a busy day. I hope you could rest a lot today and the rest of the week! I'm having some really good days, but I'm questing for a very expensive kin here, so I've spend a lot of time on Gaia lately!

Fire Emblem is a tactical turn by turn RPG. Oh I'd love to play Kingdom Hearts! I like the style a lot, FF and KH are borth from Squareenix right? I like these kind of games too, but the story took too long for me

I don't know if you have tried on other forums? I discovered a very kind community in the Lake Kindred forum, 180º different vibe from the insanity of CB xd

Yeah! You can be the main act. You know, as long as we figure out how to edify a dome or create some kind of athmosphere you could be the first musician on the moon and play beautiful melodic songs about space nwn

Don't worry, if you aren't good, we can be a comedic band and play shitty flutte biggrin

Oh you could try to practice in small bits, maybe just trying a song per day. What songs have you been learning on the guitar? And... I also love rockn'roll! Are you planning to have an electric guitar next? and I'm curious, rockn'roll in general is very controvertial to some religions, what are your fave bands from the 60's? surprised

Also, if you were a flutte teacher, and you heard your students play like this:

Would you resign? xd

The Tragedy of Generations

MONTH TWO
Mommy, Today I learned how to suck my thumb. If you could see me, you could definitely tell that I am a baby. I'm not big enough to survive outside my home,though. It is so nice and warm in here.

MONTH THREE
You know what, Mommy? I'm a boy!! I hope that makes you happy. I always want you to be happy. I don't like it when you cry. You sound so sad. It makes me sad, too, and I cry with you even though you can't hear me.

MONTH FOUR
Mommy, my hair is starting to grow. It is very short and fine, but I will have a lot of it. I spend a lot of my time exercising. I can turn my head and curl my fingers and toes and stretch my arms and legs. I am becoming quite good at it, too.

MONTH FIVE
You went to the doctor today. Mommy, he lied to you. He said that I'm not a baby. I am a baby, Mommy... your baby. I think and feel. Mommy, what's abortion?

MONTH SIX
I can hear that doctor again. I don't like him. He seems cold and heartless. Something is intruding my home. The doctor called it a needle. Mommy what is it? It burns! Please make him stop! I can't get away from it! Mommy! HELP me!