I left gaia a while back ago, but now I'm starting to come back. Mostly because I miss roleplaying and writing in general. It's taken me a while to come back, I was growing as a person, learning things that were coming to light only now and beginning to make a life with my boyfriend. Things have settle with me now, I've got a better and more stable job and more oppertunities in life. I've been finding a new reason to be creative, as before I was only doing it to escape my toxic household. But when all was right in my world, I lost my ability to do anything and I started getting anxiety when I sat down to do anything, resenting the idea of even drawing.

But now, I feel like a new person. While I'm actually pretty the much the same, I've grown as an adult and I'm starting to come back to the hobby I loved. The break was much needed and now I'm ready to try and tackle it once more. 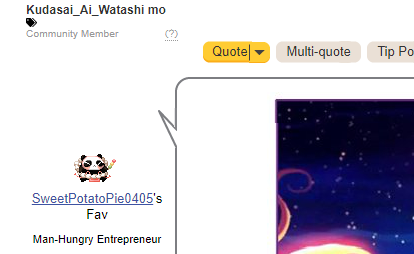 Might you tell me about your rp? I might be interested in joining, granted that I don't need TOO much background info sweatdrop It's more that I want to be a part of a story again redface
The Nerdy MikaYuki Report | 12/13/2017 7:29 am
Ohh I see 3nodding that's very well said. And for what it's worth, I'm happy for you. It sounds like you're in a good place. I know we don't talk really like we used to but I still wish you good things smile
The Nerdy MikaYuki Report | 12/12/2017 12:43 pm
I was randomly looking at my friends list and wondering who the second person from the top was! sweatdrop it's you!

May I ask what inspired your name change? What should I call you now? surprised
The Nerdy MikaYuki Report | 03/13/2017 5:06 am
I've been largely kinda sick, I think this cold has kept coming back because I'm not usually getting enough sleep to fight it off. Either it's homework, work, or trying to keep in touch with people that causes me to go to bed late, and then I have to get up kind of early to get ready to drive all the way to campus. And the weather has been really unfavorable for that, like it just snowed several inches last night and I gotta hope it doesn't make me late...

I thought of you the other day because it looked like a tropical storm outside
...because you like storms, right?...
Also another day the WIND was actually keeping me awake, of all things...
OkamiiShiranuii Report | 11/26/2016 11:27 pm
okay, thanks! you can just delete the ruined comment lol