Hello, my name is Juno.

I'm 20 years old, and for the most part I'm here to role play, and make some new friends. I've been role playing for 12 years now, as crazy as that sounds, and I'm a big fan of doing long term role plays with original characters.

I guess some things about me, my favorite artists are Owl City and Angels and Airwaves, I'm pansexual, and I want to act when I get out of college. My favorite things to do when I'm out and about are go to aquariums and eat good food, and I'm 5'7. I'm online a lot, and I have a tumblr, but I'll give that to people I really like.

I role play in full form or in script, and I do any form of couples. Romance is definitely something I prefer, and I won't deny the climax of a story being 'and then they fell in love' is one of my favorites. I like all types of settings, and as much as I love anime and cannon stuff, I don't like too much to role play as other people's characters. The only exception I'll make, is Johnlock.

That's all I guess, for now. Thanks for reading smile

People Who Are Dear

Hello. Saw your thread in FC.
Im looking for someone for some day-to-day conversation c:
I also see you like Owl City smile They calm my soul o.o

Awwww! Thank you for your comment! It made my day! I love role playing with you :3 heart heart heart 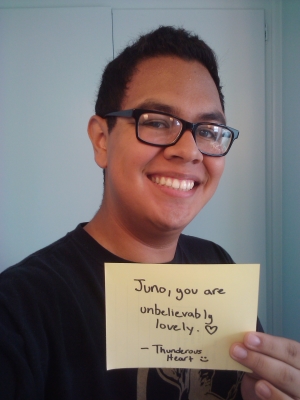 "What a feelin' in my soul, love burns brighter than sunshine..."