About Me: Story included :)

My name is Ian. I love to dance,play piano, hike,walk around and run.I'm part Black White, Italian, and Native American. I live in Indianapolis, Indiana. I am very forgiving. my favorite colors are red, white, blue, yellow, and green. I'm in love with a girl named Becca heart and I will never ever leave her for anyone or anything. I am funny some times. I'm great at singing ^-^ and i love to hug ppl ^-^. and don't ever ******** toy with my friggin emotions.. And i don't deserve to be hurt in anyway by anybody. so think about what the ******** ur to me before you do it... if u know it will hurt me and did it anyway then ur a one of the biggest a** holes I've ever met..
now the story of how i met the love of my life Becca.
I was supposed to marry this girl named Cadey and she went away for 2 weeks, and one day i met this guy named Kane. I told him about my fiance Cadey and he told me about his girl friend who lives in Germany (who turned out to be Becca)
one day I went to vist my friend Yuki. who was next to a friend of hers house.
i didn't go in house til a little later when this strange random girl wanted to call Yuki's friend a mother ********. so i went in and said that this girl wanted me to call
her a mother ******** her. i wasn't going to do it anyway...and i became the girls friend nicknamed her angle. and a little later my friend Kane stopped by and shortly later Becca. biggrin to my surprise i didn't know till some time later that i was her biggest crush. although also at the time she was going out with Kane at the time. Soon after i met becca i started seeing her and kane together a lot more. I could never hug Becca in front of Kane because well... he was very protective of her. so when he wasn't around we hugged. At the time i was the only one she told personal stuff to. One day this guy started touching Becca and stuff in front of Kane and that was getting him pissed! He then started giving out command saying no one touches Becca no one gets near Becca. bla bla bla.... I got mad then left.
After i calmed down a little bit i tried to sneak back without being seen...that didn't work. I couldn't really stay away from my friends or stay away from Becca heart heart
A little while later. Kane and Becca broke up. also around the same time I started kissing her on the cheek and hand. which made her slightly happy 4laugh then Kane pulled her away for awhile trying to talk to her. then i tried to sneak in again.... didn't work! stare
Becca told me to talk to Kane and make him follow his heart. I instead man!pulated him further into not being able to choose. he stayed away for awhile. He told me not to get attached to Becca. That statement was a little late. We started kissing each other on the cheek and and hugging she was still very sad about what happened between her and Kane my sis and her her Gaia bro told her that she has to get over him and not destroy herself thinking about him . my sis was telling me that Becca's Gaia bro liked Becca. I was really like Bull s**t then Bull s**t again. mainly because I love Becca and i didn't want him trying to take her from me and at one point i was like okay.. maybe he dose like her... i was still pissed at the idea. Then one day I held her around her waist, Then she told me she wished i wasn't getting married. I asked why. and she told me that she loved me heart heart heart :
Then one day Kane came back and he was definitely leaning towards wanting to be with Becca. I kept quiet for a bit and i knew if i kept staying quiet maybe i would miss my chance so i let out the one of the biggest sigh i ever made. I told her i wanted to be with her and then i told her i loved her. of course Kane was mad as hell; about it told me to shut the ******** up. a some time later i proposed to Becca and now we are spending our lives together happily

hey im back you have my gun please 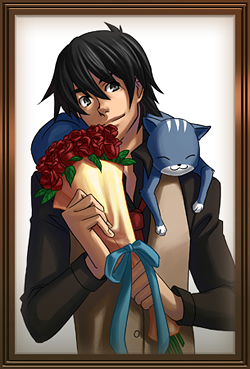 it's i ronic that my real life name is Ian.. hehe.. live to love don't live to hate. Live by that motto and may the world return the feeling somehow ^ ^

me and the love of my life Becca. I love her with all my heart mind body and soul. ^-^ Becca and i are ment for each other and i will never let her go ^-^

this is us a day before the wedding