But how quickly we forget

Such a sure and perfect plan,

And unlearn the passions that once had burned.

But how could I have seen?

What was I to do?

How could I know I would find you?

ANOTHER PHANTOM PHAN!/ YA THEY ARE EVRYWHERE! MESSAGE ME!

Quote:
According to his account of himself in the novel, the Persian once served as the chief of police (daroga) in the court of the Shah of Persia during the years that Erik was there. He refers to these times as "the rosy hours of Mazenderan". Being kindhearted, he helped Erik escape from Persia when the Shah ordered him executed, a trick that involved presenting a body washed up on the shore as Erik's. When news of the escape spread, the Shah-in-Shah punished the Persian by stripping him of his property and sending him into exile.

The Persian later travels to Paris and takes up living in a small, middle-class flat in the rue de Rivoli, across the street from the Tuileries, on the modest pension he receives from the Persian government. He becomes known as a fixture of the Opera, considered an eccentric Persian who is allowed to wander backstage where he pleases.

Excerpt from chapter 21 - "The Persian's Narrative"

It was the first time that I entered the house on the lake. I had often begged the "trap-door lover," as we used to call Erik in my country, to open its mysterious doors to me. He always refused. I made very many attempts, but in vain, to obtain admittance. Watch him as I might, after I first learned that he had taken up his permanent abode at the Opera, the darkness was always too thick to enable me to see how he worked the door in the wall on the lake. One day, when I thought myself alone, I stepped into the boat and rowed toward that part of the wall through which I had seen Erik disappear. It was then that I came into contact with the siren who guarded the approach and whose charm was very nearly fatal to me.

I had no sooner put off from the bank than the silence amid which I floated on the water was disturbed by a sort of whispered singing that hovered all around me. It was half breath, half music; it rose softly from the waters of the lake; and I was surrounded by it through I knew not what artifice. It followed me, moved with me and was so soft that it did not alarm me. On the contrary, in my longing to approach the source of that sweet and enticing harmony, I leaned out of my little boat over the water, for there was no doubt in my mind that the singing came from the water itself. By this time, I was alone in the boat in the middle of the lake; the voice-- for it was now distinctly a voice--was beside me, on the water. I leaned over, leaned still farther. The lake was perfectly calm, and a moonbeam that passed through the air hole in the Rue Scribe showed me absolutely nothing on its surface, which was smooth and black as ink. I shook my ears to get rid of a possible humming; but I soon had to accept the fact that there was no humming in the ears so harmonious as the singing whisper that followed and now attracted me.

Had I been inclined to superstition, I should have certainly thought that I had to do with some siren whose business it was to confound the traveler who should venture on the waters of the house on the lake. Fortunately, I come from a country where we are too fond of fantastic things not to know them through and through; and I had no doubt but that I was face to face with some new invention of Erik's. But this invention was so perfect that, as I leaned out of the boat, I was impelled less by a desire to discover its trick than to enjoy its charm; and I leaned out, leaned out until I almost overturned the boat.

Suddenly, two monstrous arms issued from the bosom of the waters and seized me by the neck, dragging me down to the depths with irresistible force. I should certainly have been lost, if I had not had time to give a cry by which Erik knew me. For it was he; and, instead of drowning me, as was certainly his first intention, he swam with me and laid me gently on the bank:

"How imprudent you are!" he said, as he stood before me, dripping with water. "Why try to enter my house? I never invited you! I don't want you there, nor anybody! Did you save my life only to make it unbearable to me? However great the service you rendered him, Erik may end by forgetting it; and you know that nothing can restrain Erik, not even Erik himself."

He spoke, but I had now no other wish than to know what I already called the trick of the siren. He satisfied my curiosity, for Erik, who is a real monster--I have seen him at work in Persia, alas--is also, in certain respects, a regular child, vain and self-conceited, and there is nothing he loves so much, after astonishing people, as to prove all the really miraculous ingenuity of his mind.

He laughed and showed me a long reed.

"It's the silliest trick you ever saw," he said, "but it's very useful for breathing and singing in the water. I learned it from the Tonkin pirates, who are able to remain hidden for hours in the beds of the rivers."

I spoke to him severely.

"It's a trick that nearly killed me!" I said. "And it may have been fatal to others! You know what you promised me, Erik? No more murders!"

"Have I really committed murders?" he asked, putting on his most amiable air.

"Wretched man!" I cried. "Have you forgotten the rosy hours of Mazenderan?"

"Yes," he replied, in a sadder tone, "I prefer to forget them. I used to make the little sultana laugh, though!"

"All that belongs to the past," I declared; "but there is the present ... and you are responsible to me for the present, because, if I had wished, there would have been none at all for you. Remember that, Erik: I saved your life!"

And I took advantage of the turn of conversation to speak to him of something that had long been on my mind:

"What?" he retorted. "You know I never keep my oaths. Oaths are made to catch gulls with."

"What about the chandelier?"

"Oh," he sniggered, "I don't mind telling you about the chandelier! ...IT WASN'T I!...The chandelier was very old and worn."

When Erik laughed, he was more terrible than ever. He jumped into the boat, chuckling so horribly that I could not help trembling.

"Very old and worn, my dear daroga! Very old and worn, the chandelier!...It fell of itself!...It came down with a smash!...And now, daroga, take my advice and go and dry yourself, or you'll catch a cold in the head!... And never get into my boat again....And, whatever you do, don't try to enter my house: I'm not always there...daroga! And I should be sorry to have to dedicate my Requiem Mass to you!" 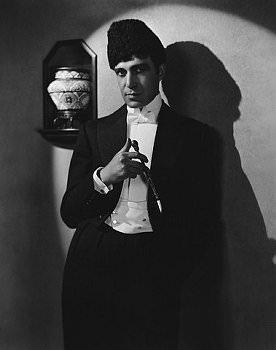