You are going to need to quote me if you want my attention. 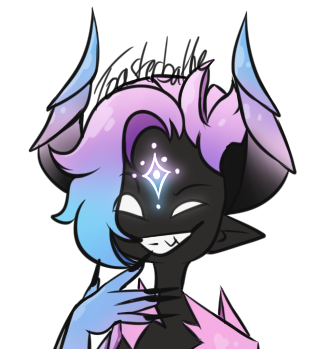 I'm Naked Under This

I am mostly just back on this site to play with the avatars for something resembling inspiration. I give stuff away a lot (it's a hobby), and love receiving art.

I nerd out for a living, and am also an author. My first book in the current series can be found HERE. It's not the last, by far.

Deification by Purple Pimp Crusader
Enola, the Scavenger God
Enola is a foul-mouthed urban god who, above all else, simply wants to be left alone. She isn't by nature very aggressive, and she won't bother you if you don't bother her. But like the skunk she takes many of her features from, Enola will strike back if provoked. The best defense is a good offense, after all, and Enola's offense is vicious.
That isn't to say Enola is friendless- she has quite a few friends. Most of them are just small and furry. She's especially fond of musteloids such as skunks, raccoons, and badgers, and can usually be found with a small mixed entourage of them. Enola is called the Scavenger God due to her similarity in appearance to skunks and her association with animals that, in the urban areas where Enola is worshiped, tend to be seen exclusively as scavengers.
Enola is notorious for her dislike of people, but will still lend her (often excessive) protection to those in need of it. Just be very sure that there are no other options before you call on Enola- she's a firm believer in "there is no kill like overkill". If Enola gets involved, somebody's going to get hurt. If you involve her needlessly, that someone is going to be you.