biggrin biggrin biggrin
Hi there, well I'm Harley and yes that is my real name, my dad is a bike nut. So I grew up around motorcycles (not literally, you know in the living-room, kitchen, etc), most people I knew had Harley's, Triumphs and the likes. I'm kinda like the black sheep in the family, I'm not that into them as I've seen too many people get creamed by a car or truck. Anyway, I'm from England which is part of the United Kingdom (how much longer it remains a United Kingdom I don't know). I've been told on the odd occasion that I have a weird sense of humour.

I'm currently at uni studying to become a Teacher, with a goal (way way down the line) to eventually become an Educational Psychologist. In a way it's quite funny as I really hated school, but I want to make it better for people like me with a SpLD. I used to hate my name as the most well known Harley was Harley Quinn, so I got some s**t in school. Now I think it's a good name as there aren't many Harley's around. So I kinda take the piss with my avi (apart from one or two themed ones) and it's basically a more modern posh kinda clown (which is what a Harlequin was). I've been a regular here since 2010 and if I'm not in the Towns (old or new) or the forums, you'll probably find me in Lake Kindred.

Omg hey!!! Thank you so so so much for the message, and thank you even more for the incredible gift heart heart heart You're awesome!!~ Also, I hope you've been well too!
malachite panda Report | 05/09/2020 2:32 pm

exclaim exclaim eek exclaim exclaim u have some amazin kin and some twins...are u sure 1 or 2 wouldn't mind stayin wiv me...i'll look after them 3nodding
TheFaroucheLion Report | 08/08/2019 6:52 am

Rest assured, it did make sense and thank you! Mostly, I just make what I like and can find items for but it's something to do and makes for some fun.
TheFaroucheLion Report | 08/07/2019 3:00 am

I hope you're doing well, Harley! Haven't chatted with you in so long... sad Have a wonderful week, dear~ 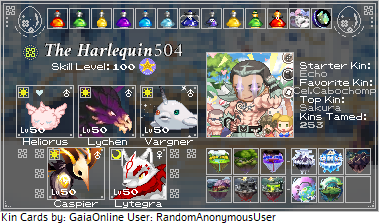