TALITHA MACER is a beautiful name, isn't it?

Yes it IS a VERY beautiful name. I love the sound of the name Talitha. It's unique and unusual. Unfortunately that's not my real name, merely the name of the character I've decided to Cosplay in Gaia.

What are Talitha Macer's Personality and Traits?

Macer is a competent and determined soldier with a strong sense of loyalty. She is particularly intelligent and resourceful, possessing an innate talent as a pilot as well as an interest in aeronautics and physics, which she studied at a very young age. During her service to the Colonial Guard, she became a protégé to the Guard's commander, Colonel Randall Aiken. While loyal to Aiken and her homeworld, she is not as resentful to the United Nations Space Command as most of the Sedran Colonial Guard. She is also noted for her curiosity and her ambition to advance in her military career.

What is the Sedran Colonial Guard?

The Sedran Colonial Guard (SCG), also known as the Sedra Marine Corps, is the primary military force of the remote human Outer Colony of Sedra. They are led by Colonel Randall Aiken, a former SPARTAN-II. Many soldiers in the Sedran Colonial Guard are well-motivated and dedicated to the defense of their homeworld from both internal and external threats. They are able to maintain a vague semblance of order in the planet's dispersed population centers. Many individuals serving in the Colonial Guard are also noted as being resentful and mistrustful of the UNSC and the Unified Earth Government. 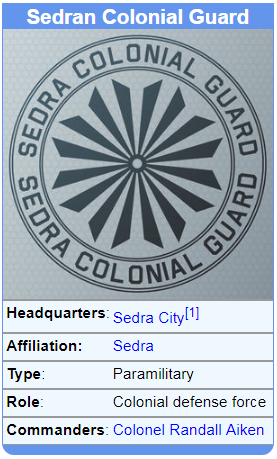 Which fandom did she come from?

Macer is the female lead in Halo: Nightfall.

Who portrayed her in Halo: Nightfall?

She is portrayed by English actress Christina Chong.

Anything else we should know about your character?
Her blood type is AB+, making her a universal blood recipient.

So who are you (the Cosplayer of the character)?

My name is Tessa which also starts with a T but isn't as cool as Talitha.
I'm female.
My hair and eye color are the same as the hair and eye color of the character. That said, if I were to cosplay this character IRL(In Real Life) I wouldn't have to dye my hair or wear colored contact lenses. This is the main reason I'm cosplaying this character.
I'm an artist and graphic designer.
I don't smoke/drink/do drugs and I dislike people who do these things.
I'm half asleep until I've drunk my breakfast coffee and I can drink up to 5 cups of coffee a day and still be able to go to sleep at night. You can call me a Coffeholic.

heart Hiya hun hows you heart
dropping by to say HI and see how you'r getting on in this new year. Hope you had a great Christmas and New Year.
cafeghosties Report | 01/01/2019 6:15 am