Shihouin Yoruichi, the former Tenshi Heisou Ban of the Shihouin family and also the former Guundanchou (Head of the Military) in Onmitsukidou. Yoruichi has many positive characteristics. She's intelligent, humorous, knows much about Soul Society inside and out, and has accomplished so much in her life. And for a noble, oddly, she certainly doesn't act like a one, considering her childish, witty self (unlike the uptight Kuchiki Byakuya), and she doesn't like being stated as a noble. Like when Soi Fon formally greeted her as "Ruling Commander", Yoruichi insisted that she be called "Yoruichi-san" instead.

Other than that, she can also transform herself into a black cat. When she does, her voice becomes so deep that she's often mistaken for a male (which she seems to employ as part of her disguise). She is good friends with Urahara Kisuke. And being the former Guundanchou, Soi Fon served as her former personal escort.

Yoruichi is also best known in Soul Society as "Shunshin", Yoruichi or "Goddess of Flash", Yoruichi for her mastery in the art of shunpo or flash step. Even though other shinigami are capable of shunpo since it's a basic shiningami skill, she exceeds the limits of shunpo of most shinigami. She also created a unique technique that combines hakuda (hand-to-hand military combat) with kidou (demon arts) called Shunkou (flash release), although she still hasn't mastered this technique yet. It is still undetermined whether Yoruichi owns a zanpakutou or only uses her hakuda and kidou skills for battle, but in certain manga panels she was seen armed with a wakizashi or a kodachi.

Soi Fon is also an important aspect in Yoruichi's life. As Guundanchou, Soi Fon had to serve Yoruichi under family purposes, but also under loyalty. Yoruichi told her once that she was like a sister to her, and they developed a close bond. When Yoruichi left Soul Society to aid Urahara Kisuke in his exile, Soi Fon replaced her and officially became the Guundanchou and the Commander of the Special Forces (Omnitsukidou). It's been said that Yoruichi left behind Soi Fon for her protection.

Even though she has left Soul Society for over a century, Yoruichi was still known as a legend. A woman with the fighting skills of a prodigy. She knows when she can win a fight and she knows when to run away from a fight. Yoruichi has taken younger ones like Soi Fon, Orihime, Chad, and Ichigo under her wing and trained them to become stronger fighters with Kisuke's help. Even if she has committed a crime worth of exile and lost her title as Guundanchou and other ranks, she is still feared and respected by the shinigami as "Shunshin", Yoruichi. Even at this time, no one has yet taken her title as "Shunshin" away from her.

Say are you interested in a job I know that I've asked it before it's just I don't remember gettin' an answer. sweatdrop
Miss Mizukie Shop Owner Report | 12/25/2009 1:15 pm

Thanks you to smile 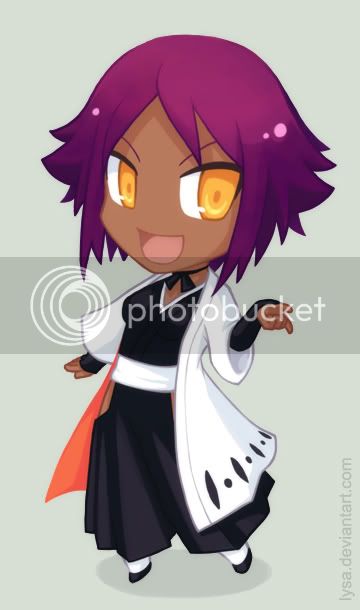 Me and all of my wonderful friends!!!!

my best friends in real life!

my fav anime naruto and bleach