Life was easy for Bill
All day long he'd just relax and lie still
Wallow and play in the mud and hay
and fed by a rancher man named Ray
Along came a spider who sat on his snout
Bill snorted and blew and gave a loud shout
He stomped his hooves to crush the poor creature
who only wanted to be friends, despite her demeanor
So offended was the spider, whose life flashed in sight
that she spun an intricate web with tremendous delight
"Soft pork" it read, on its fine, glistening pattern
The farmer gazed at Bill with his oil burning lantern
Bill was supposed to grow to be a prize winning pig
But after that morning, Ray's stomach looked big. 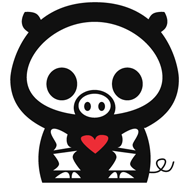 I don't know how to interact with profiles...

Black☆Star will become more than just a god!!

Hey Soul, what do you think about Kid-kun's profile?

Black Star, this is Death the Kid's profile!!