Description: Red eyes, semi-long black hair, with a crow perched on her shoulder. Wears a white blouse, a black short skirt, and a Tokin. Carries a journal of some sort. She usually isnt shown with her wings in most cases.

About Me: A tengu who has been in Gensokyo for over 1000 years, when oni were still around.
Her origin is a crow. She has the ability to manipulate wind.
Her character is honest but not rigid. She is polite to strong people, and deals more firmly with weak people. However, she is always polite when conducting an interview.
Although her powers are among the top class in Gensokyo, she never uses them just to show off. This isn't only a characteristic of hers, but of tengu in general.

She usually lives on a mountain where the wind always moves at the same speed and the same direction. She loves gossip and is always gathering information exchanged with her fellow tengu. During any exchange, information is warped, and almost all of their stories end up exaggerated.

She is the biggest connoisseur of rumors about the girls of Gensokyo among the tengu. Through observing for herself and collecting information from colleagues, barely a moment passes when she isn't obtaining material. However, much of her material is mingled with rumor.

She writes up her non-periodical newspaper, Bunbunmaru News, and distributes it among the tengu. It's a newspaper chock-full of rumors.

As the current disaster started up, the tengu were overjoyed. There was much new material to be obtained, based on which they can write up their newspapers. 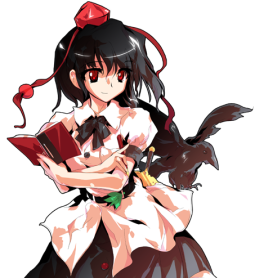