"A Hokage Protects His Village No Matter How"

In later years, Minato was put in charge of a Genin team of his own, consisting of Kakashi Hatake, Rin and Obito Uchiha.

During Kakashi Gaiden, set during the Third Great Shinobi War, Minato led his team on a mission into Kusagakure famously known as "Konoha's Yellow Flash." Because Kakashi had recently become a Jonin, Minato gave leadership of the mission to Kakashi while he went to help Konoha's forces on the front lines. Before leaving he gave Kakashi a special kunai as a congratulatory present, outfitted with the seal used for his Flying Thunder God Technique.

While helping his fellow Konoha ninja he used the Flying Thunder God Technique to wipe out all of the opposing Iwagakure ninja in an instant. He returned to Kakashi in time to save him from another group of Iwagakure ninja, but could not save Obito. When Kakashi and Rin recovered from the ordeal, Minato helped them complete the task of destroying the Kannabi Bridge.

Some time after the war ended, Minato was chosen by Hiruzen Sarutobi, the Third Hokage, to lead as the Fourth Hokage. During his reign, he had a relationship with Kushina Uzumaki who would become pregnant with his son. After reading Jiraiya's book, where the main character was named Naruto, Minato and Kushina decided to name their son "Naruto" in the hopes that he would grow up to be just like the Naruto of the book (Jiraiya's). This, in turn, made Jiraiya Naruto's godfather.

Soon after Naruto was born, the Nine-Tailed Demon Fox attacked Konoha. Minato rushed to the village's help, where he and Gamabunta faced off against the demon fox, but the beast's power could not be matched. Recognizing that the demon fox was being controlled by Madara Uchiha, Minato decided to defeat it and give Konoha the means to combat Madara if he should ever attack the village again. He used the Dead Demon Consuming Seal to seal the demon fox into Naruto's body, hoping that Naruto would someday be able to make use of its power. The act cost Minato his life, and he died as the village's greatest hero.

In the moments before he died, Minato asked that Konoha view Naruto as a hero who helped defeat the demon fox rather than the host of the monster that had attacked the village. Few of the villagers would honor this request, leaving Naruto to grow up as an outcast of the village. During the course of the series Naruto is able to change how the villagers view him for the better, but at the same time must combat the demon fox sealed within him. All the while Naruto would never know who his parents were, Hiruzen feeling it was best that the world not know who Naruto's father was.

With Minato's death, Hiruzen was forced to resume his position as Hokage due to Minato not being able to choose his successor. He made a decree that forbade the villagers from speaking aloud that Naruto was the container of the demon fox, hoping that the villagers' children would not shun him as their parents did. He otherwise tried to make Naruto's life as comfortable as he could, being one of the few people to appreciate him and putting up with his mischievous deeds.

During the sealing process, Minato split the demon fox's chakra in two, giving Naruto access to the Yang chakra and permanently cutting off access to the Yin. He left Jiraiya a key to the seal that kept the demon fox sealed within Naruto to be used to strengthen it whenever it began to weaken. As a final safety measure, he left an imprint of himself within Naruto's subconscious that would react whenever the seal was on the verge of breaking. This imprint could watch Naruto grow up and had the one-time ability of returning the seal to its original strength.

Jiraiya and Tsunade point out that, while Naruto physically bears great resemblance to Minato, his personality and style of Ninjutsu are almost identical to his mother. While Naruto is boisterous and relatively thick, Minato was calm, collected, and a natural genius. When faced with an enemy, he could kill in cold blood, and seemed well aware of the terror his reputation inspired in his foes. He appeared to be respectful of those around him, as he was reproachful of freely speaking of others' pasts, and was said to have been a very nice person.

Jiraiya has said that Minato was a shrewd person and was not the type to do something without reason. All in all, Minato was known for an unbeatable determination and unbelievable drive which he passed on to his son. Minato's devotion to the village and his love for his friends inspired all those around him, and as such, he became well-liked by the villagers. He is nevertheless understanding of the fact that Naruto might hold some animosity for him for sealing the the demon fox within him.

t is not until Pain attacks Konoha that he makes an actual appearance in the story. When Naruto starts to give into the temptations of power from the demon fox and is about to release the beast, the imprint Minato left behind stops him. Although he voices his dislike of seeing the demon fox again, he points out that its actions have allowed him to see his son. Naruto picks up on this and is overjoyed to finally find out who his father is. Minato tries to talk with Naruto, but the fox keeps interrupting the conversation so they go someplace that is quiet. After the shock of finding his father, Naruto is quickly outraged at the idea that Minato would seal the demon fox in his own son, and gut-punches him. Minato apologizes and Naruto quickly gets over his rage at the thought of being the Fourth's son.

Because he has a limited amount of time to talk to Naruto, Minato briefly catches up with him, at the same time indicating that he knows Pain killed Jiraiya. He expresses his suspicions that Pain, like the demon fox years earlier, is being controlled by Madara Uchiha. He goes on to suggest that so long as the current ninja system exists, people like Pain who are ruined by war and only go on to create new wars will continue to exist. He restores the seal on Naruto's stomach and encourages Naruto to find a way to stop the vicious cycle of death and destruction, voicing his confidence in Naruto before disappearing.

According to Jiraiya, Minato was easily one of the most gifted shinobi who ever lived. He created the Rasengan, a technique that does not rely on hand signs, but instead uses a concentration of spinning chakra in the palm that causes immense damage to its target on contact. Minato had planned to add his own nature manipulation training to the Rasengan, making it even more powerful, but couldn't manage to combine the two prior to his premature death. He had a keen knowledge of fūinjutsu and was one of the few people capable of getting Gamabunta to work with him.

It is unknown exactly how strong Minato was in combat. Flee-on-sight orders were given to enemy shinobi during the Third Great Shinobi War in case he ever appeared on the battlefield. This stemmed from his Flying Thunder God Technique, which essentially allowed him to teleport to any location with the use of a special seal. By throwing kunai that had the seal attached to them behind enemy lines, Minato could wipe out an entire platoon in the blink of an eye without receiving a scratch. This earned him the nickname of Konoha's Yellow Flash because of the speed at which Minato (with his yellow hair) moved when using this jutsu.
____________________________________________________________
Old and memorable screenies:

Kushina looked at him. "They are still hot."

Kushina sat the hot plate of cookies on the counter as she let them cool off.

Kushina left the room as she walked into the kitchen.

"I hope he finds a girl just like his mother." 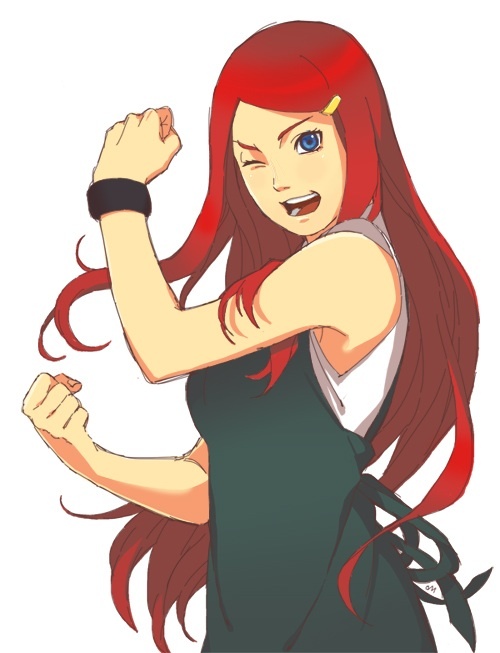 "Yes, with my perfect genetics he will be strong just like his mother."