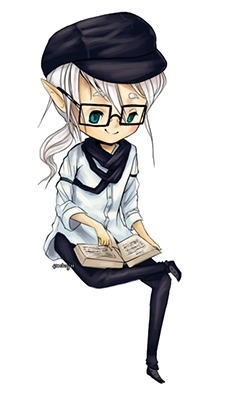 
♔ i'm really just here for the dressing up and the ocs.


art of my oc Leo by the incredible Flocksy ♥ ♥

I'm not on Gaia much nowadays; you're more likely to find me here. I love the SDPlus Dolls and still have a sizeable collection despite not having worked on it for months. I'm planning on selling nearly all my inventory, though - you can find my list of items to sell currently in my journal.

you don't have to worry about giving me anything back if you can't find anything! just relax and rest <33

The odds of me leaving Gaia are very very low. hehehe whee So much time and cash invested on here, lol. But I just log in to check out new items, play in Dress Up, read GCD posts, and check up on the guild. I wish I had time to do art here and be active again in the Art Shops forum, but art commissions provide half my income atm. Oh, I have a hooman account because I still love the pretty Mori Girl items. Don't be alarmed if you receive a friend request from petit faon.

Ah, yes, that long waiting list. emotion_facepalm I guess it must be that Gaia does not have enough artists to meet the demand. But hopefully things change for the better soon and you can have that Meili inspired item!

My Tumblr feed is all over the place, I think I need to cut back on accounts I'm following there so that I can see the important ones, like yours. <3 I am mostly active on Instagram (tama_draws) where I share my art and have more reactions than I did on dA and tumblr. And I started a Patreon last month that I hope to give my full focus soon. emotion_dowant
morimimi Report | 07/29/2018 10:06 am

thanks for buying from my shop! heart

I ride or die Durem every event, haha. So yes ABSOLUTELY THEY WOULD KNOW EACH OTHER or at the very least be aware of each other. We're alliteration twins cool huehuehue

The Committee and their rival nuGen are from a plot going on this year with two competing robotics companies that you were able to literally apply to via PM to 'work there' (really it just granted you an item and an achievement) so I rolled with it. Deli's out of retail now, hahaha. Also might've been a larger allegory for Gaia's management with the Goldemort years and all that?? Gaia kind of dropped the plot though. I can totally picture Ko just clinging onto Crescento like "NOTICE ME SENPAI" because that's 110% what Deli did before Jack died I'm still upset about that. Uhhh style.. I need to move some items over to him to be more accurate but basically sad tumblr hipster; big sweaters, tight pants, occasional blazers, beanies.. that sort of stuff. And more color than what Deli wears. Definitely works in a coffee shop (what would one in Durem be named we should brainstorm) and gets super shy around cute boys.

HMMM you could go with changelings or shifters depending on what they shift into..? Yuanti can shapeshift into snakes. Death works really weird in D&D so yeah that definitely works PLUS there was a whole arc in one of the books about a death curse and old death wounds coming back as scars so that's neat. Domitre's a plain ol' human boy but Deli's like a reverse tiefling (which I don't even think is a thing). Instead of starting with human heritage and going demonic her family started demonic and went more human. D&D races. But basically just roll with whatever, fantasy is super flexible.

aww geez thank you! ;u; i get bored of the same color combos so i always try to push myself to try different things so i am glad you like it! i really like your avatar too. c: