Well her full name would be Kemba. The rest is classified, and as you can tell she is a snow leopard of sorts. A assassin at heart, with ridiculous range being her strong point. A pinpoint killer with overly advance technology helping her hit her marks at range and boosting most of her abilities almost by almost two hundred times.

Kemba stands at 5' 6" and weighs about 140 pounds soaking wet and 5' 9" when counting her ears. Staring at her face, its a cross between a human and a feline as her face is elongated slightly with a muzzle and a black nose. Her eyes are a soft hue of blue and her hair on top of her head is midnight black and usually cut in a messy bob with it long enough down to her chin.

Moving down to her body, its curvier than the average female as her entire body is covered with fur that is mostly white but covered with different shades of grey spots. She doesn't have much of muscle tone to her as her body is more lean than anything else. Her breast size is a double F almost borderline to an G as they are soft and plushy with a high amount of bounce to them. Her waist line is thin and firm giving her a great hourglass figure giving her waspish thighs and a beautiful bubble butt with a bushy long tail growing out right above it. With those wide hips, she also has thick creamy thighs that makes it a little hard to find clothes that would fit her type if figure. Usually everything she tries to wear hugs her curves a little tightly. Her feet are human which lets her wear all different kinds of shoes as heels make her walk with a sway.

Now I know what you are thinking... What in the hell is this gun obsessed cat carry on her on a regular basis?


So that's all the basic information that's about her. If you want to know more about her or have any questions, then drop a pm. She doesn't bite all that much... heart

For more random things, click below.
Steady, deadly, not all that quiet. Kemba is amazing with a rifle, almost too good at it most of the time taking one shot just to take down the target. Her one problem though is she doesn’t really know the word Collateral Damage. The prime problem that makes her shots so lethal is her special weapon. An experimental semi-automatic sniper rifle that champers all sorts of .50 caliber rounds from the normal armor piercing and explosive, to the more advance emp and the more volatile corrosive shots. Able to chamber each round in less than a second, she’s more than a threat to anything human or unnatural.

Born in a lab that had a skill of spicing DNA, Kemba was born not of a normal human but a snow leopard hybrid with a keen eye for anything that was in front of her. Unfortunately for her, she wasn’t able to know her mother from the military taking her away and starting her training young to be a secret weapon for their army. Turns out spicing someone’s DNA with that of a snow leopard gave a competitive edge even at a very young edge. Once she was fourteen years old, she was shooting ten times better than their best sniper, and by age twenty one her accuracy with a rifle for over twenty thousand shots was a ninety nine point three percent. At the ripe age of twenty two, she was ready to go out into the field with her team of five other spliced allies to become the best assassination force that’s never been heard of. For three whole years, Kemba and her rag tag team of other mercenaries completed mission after mission without a single mess up until one eventful night.

Kemba has always been the lookout, on top of some type of vantage point to overlook the mission area while the rest of the team went and did everything up close. Usually her rifle is empty with a magazine sitting right next to her, but this time it was locked and loaded in her high powered rifle. Something wasn’t right and she could smell it in the air. One by one, her friends didn’t respond on their radio. It wasn’t until she noticed her last operative fighting with some kind of special unit from the same organization that created her. Turns out that her as an asset turned into more of a liability from just how dangerous she was. They sent out thirty of their new elite guard to give them all an early retirement, unfortunately though, only four of them were able to make it to her perch. The other twenty six of them lost their head and most of their upper body from a single shot. The four that was left, Kemba took the liberty to torture and pull out any type of information she could before just disappearing off the face of the earth. She stayed hidden until someone needed her special kind of skill… 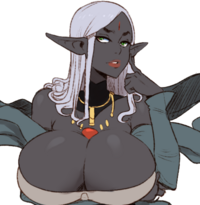