Super Sonico (Japanese: すーぱーそに子 Hepburn: Sūpā Soniko?) is a fictional female character created by Tsuji Santa for the Japanese computer and video game software company Nitroplus, first appearing as a mascot for a Nitroplus-sponsored music festival in 2006. Nitroplus has since developed the character into a media franchise that includes music products, manga series, computer and video games, toy figurines and other merchandise. An anime television series by White Fox based on the character aired in Japan between January and March 2014.

Super Sonico is a fictional character created by Tsuji Santa of Nitroplus. Her debut appearance was on October 14, 2006 as the mascot for Nitroplus' annual live music festival event "Nitro Super Sonico", which took place at Shiba Park in Minato-KU. Nitroplus was initially focused on computer games based on visual novels, but every year since 2000 they have also held a music festival.

Sonico appears in the various media as an eighteen-year-old college student.

She is depicted as an attractive, busty and voluptuous young adult woman with light peach skin, large pink eyes, and straight light pink hair. She keeps her hair long in back and in the front it covers her forehead, around her eyes, down to the bridge of her nose. She is always shown wearing her signature headphones on her head. Her depictions show much variation in her facial features and body proportions between the different artists, while always keeping her trademark traits; headphones, pink hair color and large bust. She also appears as a gravure idol as well as the vocalist and guitarist of the fictional band First Astronomical Velocity (第一宇宙速度 Daiichi Uchū Sokudo, literally first escape velocity?). She is prone to sleep in a lot, often requiring help to wake up, and her favorite foods are macarons. "Super" is her family name, and her bandmates refer to her as "Nico".

The main opening song of the anime is "SuperSoni♥" (すぱそにっ♥ SupaSoni♥?) by Super Sonico (Ayano Yamamoto). The opening theme for episode one is "Beat Goes On" by Ayano Yamamoto, whilst a different ending theme, each performed by First Astronomical Velocity (Yamamoto, Mai Goto, and Mami Ozaki), is featured in each episode.

Music CDs
To date, there have been six singles and three albums released featuring Sonico.

Games
SoniComi (2011/2016, PC)
SoniComi (ソニコミ?, full title Communication with Sonico) is a computer game for Microsoft Windows released on November 25, 2011, developed by Nitroplus and published by Nitroplus and Enterbrain. As a visual novel game, the player takes the role of Sonico's cameraman. The game features events where the player is able to take gravure photographs of her. A PlayStation 3 adaptation with improved visuals, titled Motto! SoniComi (モット！ ソニコミ?, full title More Communication with Sonico), was released on March 20, 2014.The PS3 version received a Famitsu score of 30/40.[14] The game was released worldwide with english translation by JAST USA through Steam featuring dubbed voice by Jessica Nigri.

SoniPro (2014, 3DS)
SoniPro (ソニプロ?, full title Super Sonico in Production) is a game developed by Nitroplus and Imageepoch for the Nintendo 3DS announced during the 2013 Wonder Festival. As an idol-producing game, the player takes the role of Sonico's producer, who aims to train her to become an idol. The game was released on July 31, 2014.

Appearances in other games
Sonico has made cameo appearances in various games, including Le Ciel Bleu, the visual novel Lovesick Puppies, the Japanese online games Web Knight Carnival, Mechanical Girl War Z, Dragon League,Dungeons Lord, Momoiro Daisen Pylon and Blue Sky Dragon Guild, and will be a playable character in Super Heroine Chronicle.Sonico appears as a character within the eroge Axanael developed by Nitroplus. She also appears in Square Enix's Kaku-San-Sei Million Arthur between March 11 and March 23, 2014. Super Sonico appears in the Nitroplus Blasterz: Heroines Infinite Duel fighting game, appearing as a support character in the arcade version and as a playable character in the console version.She will also appeared in Senran Kagura: Peach Beach Splash as one of the DLC characters along with the three characters from Tecmo Koei/Team Ninja's Dead or Alive series.

Anime
A television anime series titled SoniAni: Super Sonico The Animation (そにアニ?) was announced at the Nitro Super Sonic 2013 event held at the Tokyo International Forum. Produced by White Fox, the 12-episode series aired in Japan between January 6, 2014 and March 24, 2014 and was simulcast by Crunchyroll.[33][34] A DVD and Blu-ray release of the TV series in Japan was announced for March 19, 2014. Sentai Filmworks have licensed the series in North America and will release it on Blu-ray Disc and DVD on May 26, 2015. The Anime Network began streaming the series February 6, 2014. MVM Films have licensed the series in the United Kingdom.In Australia and New Zealand, Hanabee licensed the series within the region.

Endorsements
Sonico was used to promote the International Exhibition Center station of the Tokyo Waterfront Area Rapid Transit Rinkai Line.[42] She is also being used to promote the Soni Plateau (曽爾高原 Soni Kougen?) brand of beer from Nara Prefecture, as a collaboration based on the similar-sounding name. Sonico was also the mascot for the 2013 Anitamasai Convention in Saitama.

The Super Sonico Tab is a special edition ASUS MeMo Pad ME172v tablet computer featuring an artwork of Sonico on the rear of the device. 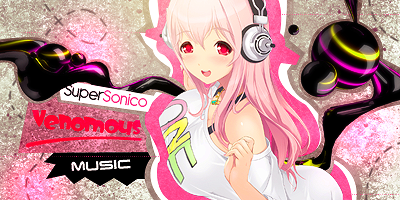