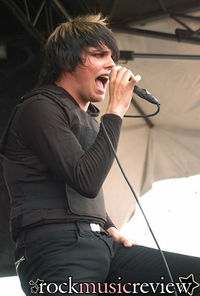 "I know something you don't! And that is... I'm not wearing any underwear!" (Crowd screams) "We're gonna get sexy for a minute! Ooh. Lemme see you clap your hands."-GERARD WAY!!!

"At times there will be people out there who are willing to do anything to put you down! But don't EVER solve that with violence! Cause you're faster then them, better then them, and a HELL lot better looking then them!"

"Mikey here thinks that nobody in here likes him..."-GERARD WAY!!!

"When you're touring and the minute you tell someone that you're from Jersey it's the equivalent of telling them you just got out of jail." "It takes me a while to tell stories. I think it's because I was drunk for three years."

“For me, [being onstage] is me being everything I always wanted to be," he says. "It erases everything I hate about myself. Nothing can hurt me. I feel invincible. I feel like everyone else on that stage is invincible and we're capable of anything. There's no stopping us."

"Uh, actually, we like to kidnap them in a van, and tie them up, and leave them somewhere dangerous. SURPRISE!"

"Be yourself, don't take anyone's s**t, and never let them take you alive."-GEE!

You know you're obsessed with MCR when:

*If you are a guy, you always refer to your girlfriend as Helena, no matter what her real name is

*Whenever you have to go, or someone else has to (preferrably to bed), you say "so long and goodnight"

*You refer to your guy friends as Gerard, Mikey, Frank, Ray, and/or Bob

*If you are a girl, you continuously talk about how (insert member's name here) is hot/sexy, and that you WILL marry him someday

*Whenever you get someone back, you give "Three Cheers for Sweet Revenge"

*You go to EVERY MCR concert that's held, even if it's in another state

*While at a concert, you jump up on stage and glomp Gerard once the song is over, causing security guards to have to pull you away

*You try to copy Gerard's voice everytime you sing, whether the song is by MCR or not

*You refuse to listen to any other band other than MCR, saying they all suck

*When you get married, you ask if your husband/wife will carry you To The End

*Whenever someone gets arrested, you go to the person and say "You have no idea what they do to guys like you in prison, don't you?"

*You join the Black Parade!

*You cried when Gerard Way cut his hair

*Not only that, but DYED it BLONDE of all blasphemers!

*You creamed your pants when "Dead!" made it to Guitar Hero 2

*But then cried again when you found out it was only for the xbox version, and you have the PS2!!!ahhhh!!!!

Interviewer: “Wild night out or romantic night in?”