Age: That would be telling, wouldn't it?

Favorite Color: This is an idiotic question. Blue

Religious Standpoint: Kill or be killed. Save your religion for someone that cares.

Alliances: Only on a temporary basis.
---

Story:
The Duros male Cad Bane lived during the last decades of the Galactic Republic and hailed from the planet Duro. He grew up on New Tayana, a space city orbiting the polluted surface of Duro. As a resident of the Descent Ghetto, his best friend became fellow Duros Soopan. He entered bounty hunting by around the year 24 BBY, beginning his career by tracking down bail jumpers and other low-level criminals in the slums of his hometown. When he eventually left New Tayana, he swore he would never return. Although he became attached to the financial reward of his missions, Bane recognized that a reputation would be necessary for success in the war-torn climate that he sensed was on the horizon, with rumors of secession abound in the Republic's Outer Rim star systems. To build a name for himself in the galactic community, he decided to kill a Jedi and thus took on a job from Akris Ur'etu, the crime boss of the Skar'kla Consortium, a criminal organization based on the galactic capital of Coruscant.

-
As he gained prominence over the next few years, Bane earned notoriety and a reputation as the galaxy's preeminent mercenary. He became known as one of the most notorious, ruthless, and fearsome bounty hunters, particularly after the death of Jango Fett—the bounty hunter considered to be the galaxy's best —at the opening battle of the Clone Wars in 22 BBY. With Fett out of the picture, Bane's reputation grew as the war continued between the Republic and the Confederacy of Independent Systems. He worked with several underworld dregs in his jobs; among their number was the shapeshifting Clawdite Cato Parasitti, a lethal assassin who shared his allegiance to credits. Parasitti subcontracted assignments for him and recruited extra help as he required During the war, Bane flew the Sleight of Hand, a Telgorn dropship that he extensively modified; he used the ship's ion cannon many a time to disable merchant cargo ships. His work earned him some powerful enemies, and a AurebeshSans-Serif credit 500,000 bounty was placed on his head for crimes against the Republic.
- 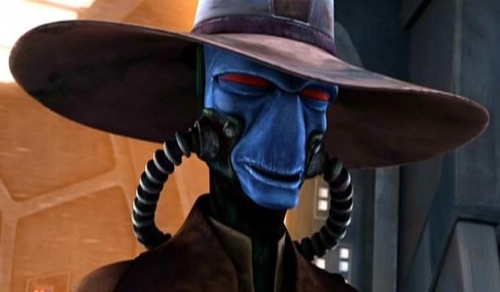 Pfft he had it coming

Hahaha I haven't seen tales yet, it was really funny!

I forgot to comment back to you I am so sorry I was going through deleting comments and saw this, it looks very cool!
Any chance you'd be willing to get into borderlands too?
XD

I use to have a bane awhile ago~
I tried to make a grievous but I failed so hard.