Journal of my adventures, and so on, and so forth.

its the female Batsi...

You should join the ultimate marvel guild. It looks like you could do well.

Big fan of 'Barbara Gordon' Just curious where you found your pictures of Batgirl [Other than the obvious ones from Batman: the Animated Series]
Epic-Fail-Angel Report | 01/07/2010 10:10 am

((Up for an rp?))
Ragady remained in the shadows, for now. Out of sight. She watched her prey carefully, as she always did. Watching, waiting, for the perfect moment to make her prescence known. Deciding on the best method for how to fight this one. She had faced a Batgirl before, and been quite pleased with the results. The girl had been better than the bat-bully, in her opinion. She smiled to herself. This would possibly be much more fun than the last battle she got into. If that was really what you could call it. After all the trouble she went to set it up, and the whelp lost just like that. This, however, should prove better...
Mad Mr Hatter Report | 09/20/2009 1:51 pm

Hatter moved in slowly from the shadows, hmming and hawing...a fresh smatter of blood tressing the front of his white vestment. His eyes were wild and vacant, partially hidden beneath a lowered grinning top Hat placed aptly on a blonde haired head. "--My, oh me, oh my...this is quite the little set up you have here Batgal." he cooed cheerfully, those thin lips parting to reveal a toothy smile...lips meeting his chipped tea cup as he drank the amber liquid in. "--I like it!"
A Fitting End Report | 08/17/2009 4:16 pm

As the daughter of Gotham City’s Police Commissioner James W. Gordon, Barbara Gordon was raised in a household filled with cops and their stories. Barbara wanted nothing more than to follow in her father’s heroic footsteps, but the elder Gordon, knowing how dangerous the streets of his crime-ridden city could be, refused to allow it. Bothered by her father’s refusal to allow her to serve on the G.C.P.D., Barbara wore a homemade “Batgirl” costume to a masquerade ball as a jibe against her father but instead wound up saving billionaire Bruce Wayne from a kidnapping attempt by Killer Moth. Deciding that this was how she could serve the cause of justice, Barbara Gordon elected to keep her new costumed identity. Her source of inspiration, Batman, was as much against her decision as her father would have been had he known who she was behind the mask, but the Dark Knight eventually came to accept Barbara as Batgirl and as part of his inner circle of crimefighters protecting Gotham City.

Base Of Operations: Gotham City 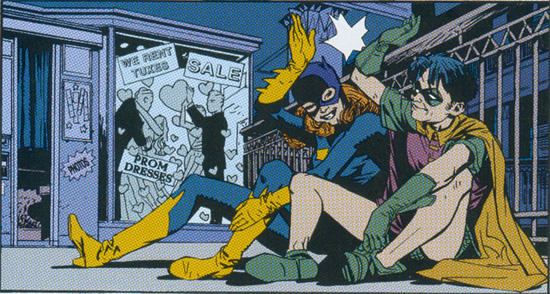