Nobutada Oda is Nobunaga's eldest son and successor. He followed his father into many of his campaigns, even being entrusted to lead a few battles without Nobunaga's supervision. His promising future was cut short due to the Incident at Honnōji. 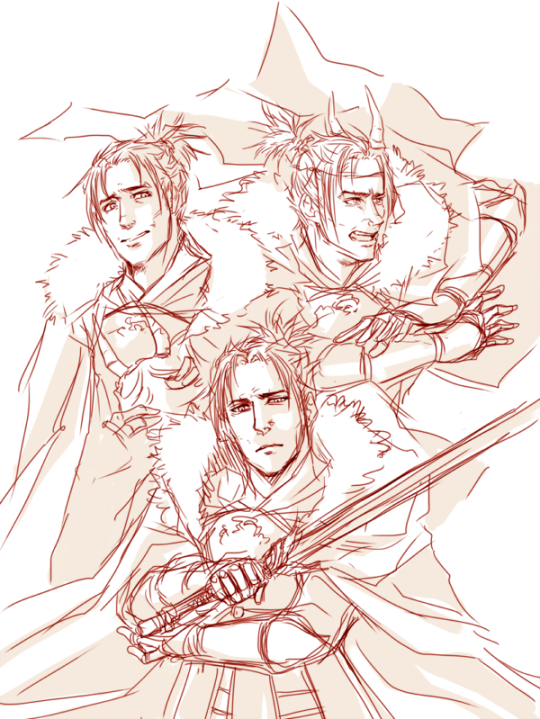 Oda Nobutada was Nobunaga's eldest son born in Owari. His biological mother was not listed in the Oda family records, though later generations would hold various theories of her identity. According to the temple records at Sōfukuji, he spent many of his childhood days with Kyūan Keiju. In 1571, Nobutada and Nobukatsu made funeral arrangements for Keiju, leading to the common presumption that she was their biological mother.

Nobutada's name as an infant was Kimyōmaru (奇妙丸, loosely: "Strange One" ), a name which was allegedly declared by Nobunaga himself. As the story goes, Nobunaga named his son after glancing down at him and retorting, "He has a strange face." The childhood name is considered bizarre and derogatory, even by the standards of the time period. Yet the gesture has been argued to be a sign of Nobunaga's offbeat humor, his sincere fascination for his heir, or an emotional defensive mechanism during a time when infant mortality rates were high. Kanei Shōkakei Zuiden alternatively refers to his younger self as Kimyō-Onzōshi (奇妙御曹司). Nobunaga Kouki also dubbed him Kankurō (勘九郎) as he aged.

Ever since his childhood, Nobutada was trained to become Oda clan successor. Nobutada was not given any formal responsibilities from his father but was permitted to follow Nobunaga's activities. He commonly studied war and politics through keen observation. For instance, he was given his own battalion at the Nagashima conflicts in March 1573, but Nobutada was not known to have personally fought or issued commands when he was on the field. Nobutada was recognized as talented potential from an early age.

As a condition of the Takeda and Oda alliance, Nobunaga's adopted daughter Ryūshō-in married Takeda Katsuyori. When she died in 1567, the eleven-year old Nobutada was engaged to a seven-year old Matsuhime. Every political measure was done through letters, and neither child was known to have left their homes or to have met their engaged partner. His engagement ended in 1572 when the Takeda-Oda alliance collapsed with Shingen's campaign towards the capital.

Records indicate that Nobutada's rite to manhood ceremony occurred at a curiously late age (roughly 16~19) and roughly the same time as a few of his siblings. Arakawa Bunsho claims that he was first called Nobushige (信重) before being called Nobutada, a new name made in respect to Nobunaga and their family allies the Tokugawa. Other sources instead claim that the "Tada" in his name was shared with Hosokawa Tadaoki who had his adult name change roughly around the same time.

Nobutada's first battle was Odani Castle. Nobutada's accomplishments are torn between two different accounts. One side states that he was placed along the castle outer perimeter; his battalion was not needed for combat since the majority of the fighting took place closer to the castle. The other insists that he was near his father's battalion and his contributions played a pivotal part for the Oda victory.

Clan Inheritance
Nobutada was made Oda commander for the Siege of Iwamura Castle which was set shortly after Nagashino in 1574. 30,000 Oda soldiers surrounded the 1,100 or so Takeda. The cornered Takeda were harassed by a night raid by Oda troops. Reports for the battle's conclusion are mixed —either Katsuyori tried to assist but arrived too late or Iwamura Castle lord Akiyama Torashige surrendered to Nobutada and was executed in exchange for the people's safety— but Nobutada's troops reportedly annihilated everyone inside the castle. Among the argued victims was Otsuya no Kata, Nobunaga's aunt. His leadership for the campaign boosted his reputation with the Oda retainers.

On November 28, 1576, Nobutada was given the family estate, governance of sections of Mino and Owari, and donned the lord of Gifu Castle. Nobunaga later dubbed him Akitajōnosuke —an archaic title for a second-caste central government magistrate— within the same year. While it was technically impossible for either Oda leader to be granted political prestige with the imperial court, Nobunaga's influence could had potentially granted Nobutada enough gumption to be within the realm of becoming shogun. The notion at least solidified Nobutada's succession.

When Matsunaga Hisahide rebelled and tensions rose for Shigisan Castle, Nobunaga entrusted his son to deal with him in October 1577. Nobutada was the Oda's main commander for the castle siege, leading an army of 40,000 against 8,000. On the last day of fighting, Nobutada permitted Tsutsui Junkei to the front lines and intimidate the castle defenders. When Junkei refused to budge against their pitiful artillery, morale plummeted and the desperate castle defenders were swiftly killed. Following this battle, Nobutada was recognized as a leader who followed his father's footsteps. He would act as Nobunaga's replacement for other campaigns at Nagashima and Ishiyama-Honganji.

During the second battle of Kōzuki Castle in 1578, Nobutada led a massive force of reinforcements in an attempt to aid the stranded Hashiba Hideyoshi. However, the Oda troops fell victim to the Mōri's stratagems near Miki Castle, and Nobutada's forces were to ordered to withdraw from the conflict. A handful of Nobutada's retainers (Akechi Mitsuhide, Niwa Nagahide, Takigawa Kazumasu) were able to provide assistance for Hideyoshi's troops.

After Nobumori Sakuma and Andō Morinari's exiles from the Oda, Nobutada was entrusted with the eastern sections of Mino. In February 1582, Nobutada used his position to lead an army of 50,000 to annihilate the remaining Takeda with Tokugawa Ieyasu and Hōjō Ujimasa. Nobutada's forces attacked southern Shinano, and many castles fell to the Oda in quick succession. His troops worked closely with Kazumasu throughout the march. They rushed through castle moats and climbed over the castle's simple fences to crush the defenders. Alternatively, castle defenders chose to surrender to the Oda rather than risk fighting.

Faced with the merciless charge and abandoned by his generals, the weakened Katsuyori was unable to hold his ground. On March 11, Anayama Nobukimi, Ieyasu and Nobutada were convening to decide the Takeda leader's fate. Katsuyori took this opportunity to raze Shinpu Castle and attempt an escape. Kazumasu's troops spotted him and closed off his exit, leading to Katsuyori and his closest family faltering at Mount Tenmoku. Days after Katsuyori's suicide, Takeda retainer Oyamada Nobushige pleaded to enter Oda service. Nobutada was recorded to have scoffed, "You say this after you betrayed your master Katsuyori. Oyamada, you are undeniably the most disloyal person that I have ever met." Nobutada then personally ordered for the execution of Nobushige and his immediate family at Kai Zenkōji.

Honnouji
Like his father, Nobutada was resting within the capital to provide ready assistance for Hideyoshi's siege of Bitchu-Takamatsu Castle. Nobutada resided within Myōkakuji, another temple that Nobunaga liked to rest. Once he received word that the Akechi army surrounded Honnōji, Nobutada tried to hurry his men to assist but were too late to save his father.

Resolved to save what he could, Nobutada and his followers relocated to Nijo Castle, the nearby residence of the crowned prince (Prince Masahito). When the castle was surrounded, Nobutada opened an exchange with Mitsuhide to permit the prince's safe escape. Once the prince was away from the premise, Nobutada and his few men tried to resist. They were eventually overwhelmed by Mitsuhide's retainer Ise Sadaoki. Depending on the source, Nobutada either fought to his last breath against his foes or committed suicide. Shimokata Yasaburō, a man who claimed to be Nobutada's page, said he was gravely injured in the fighting. Nobutada dragged him to safety and congratulated him with well wishes to meet again in another life. With a defiant smile, Nobutada charged into the fray and lost his life. He died when he was 26 years old.

Nobutada never married but he sired two sons, Hidenobu and Hidenori. Both were born shortly before their father's death and later manipulated by Hideyoshi's political power plays. He had many alleged concubines: Suzu, Nagamitsu Shiokawa's daughter, Mori Yoshinari's daughter, Wada Magodayū's daughter, a maiden of the obscure Mino based Shindō clan or Matsuhime

its a secret.dont tell anyone

"maybe one day, I'll be able to surpass Father."